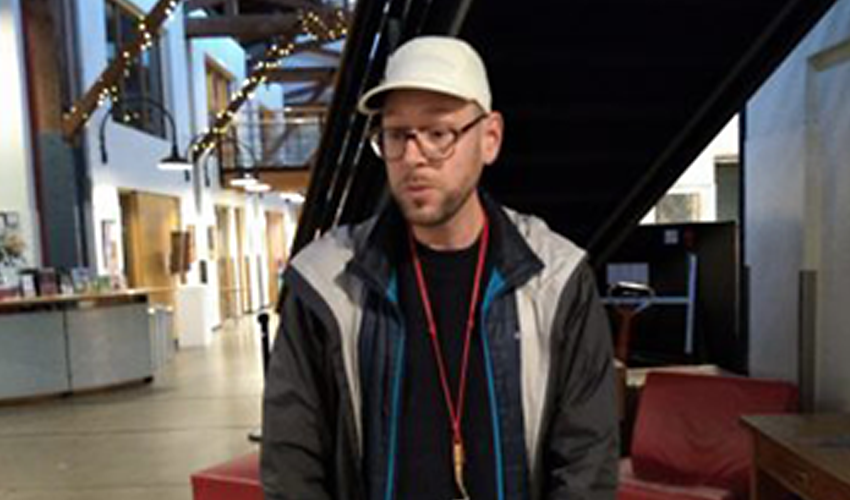 The end of 2019 is upon us. Roundhouse arts programmers are recollecting another multi-faceted year of residencies, art installations, partnerships, and engaging public events. During a recently concluded residency – Frequencies, the community was invited to participate creatively or observe, but also to write something about themselves and their relationship to music.

A previous blog post about the Frequencies residency describes some of the ideas behind Artist in Residence George Rahi’s modern day bell tower. This 2nd blog focuses on the people who experienced and contributed to it. Artists, Roundhouse visitors and staff, friends and strangers, kids and adults, dappled and created on the keyboard that instructed George’s sound sculpture throughout November. Long after participants left their facilitated recording session, the bells’ diligent chiming enhanced the Roundhouse soundscape, and functioned as a reminder of the presence of each unique individual who came, experienced, and contributed to the space.

So, who were these people who came out to engage with Frequencies?

A francaphone visitor to Roundhouse partner’s Modulus festival stopped by after a concert in the Ex Hall to check out George’s exhibit. M. Ceynette created something on the keyboard and spoke a little with George about his ideas. She described music as an emotional and sensitive friend, and as a form that exists beyond language barriers. Poetically, this participant noted the universality of music, as something that can be loved and experienced without having particular knowledge of an alphabet or code.

Nikola is a musician who moved to Canada from Serbia a few years ago. He came to the Roundhouse with his 3 year old daughter and chose to only dapple a bit on the keyboard and listen to the bell tower activity, instead of composing. He was interested to observe and consider the self-made nature of George’s instrument, and noted the way the bell sounds blend into each other, overlapping in the creation of an effect.

Chad stopped by with his son who is “obsessed with music”, and described his own relationship to music as that of a supporter. Although he too came out for Modulus Festival’s concert, he expressed particular enthusiasm and interest in George Rahi’s piece. He did not compose himself, only observing his son’s making, but commented on the engaging effect of the concert-installation combination. He and his family spent time in an exchange with those who gathered around George’s keyboard that afternoon, observing other composers and connecting through George’s instrument.

Many other participants were part of Frequencies, and imprints of their visits also filled the space with regular, delicate bell chiming. There was sometimes recognition of the piece or the person who made it, and other times melodies were more anonymous. Whether composers were known or not, thank you to all who came out to be part of this collective, month long composition! Though George’s instrument is gone, the essence of those sounds live on in the space!

About George: George Rahi is a Vancouver-based composer and sound artist who creates provoking encounters with sound, space, and technology. Using self-created instruments and installation-based methods, his work explores the sculptural aspects of sound and its relationships to various modes of listening. His work has been featured at SPEKTRUM (Berlin), Regenerative Feedback (Rotterdam), Fusebox Festival (Austin), Artificial Sonification (Matera), and the Elektronmusik Studion (Stockholm). He has facilitated instrument design workshops through the Hadden Park Fieldhouse, Western Front, and VIVO Media Arts Centre. He was a recipient of the 2018 R. Murray Schafer Soundscape award and holds an MFA degree from Simon Fraser’s School for the Contemporary Arts.

By Heather Myers. Heather Myers is a mother and dance artist interested in facilitating the space between creative process, audiences, and communities. Throughout the fall of 2019 her arts management studies at Capilano University afforded her the privilege of learning from the art programming heroes of the Vancouver Park Board.