Home > The Art of Sound

The Art of Sound 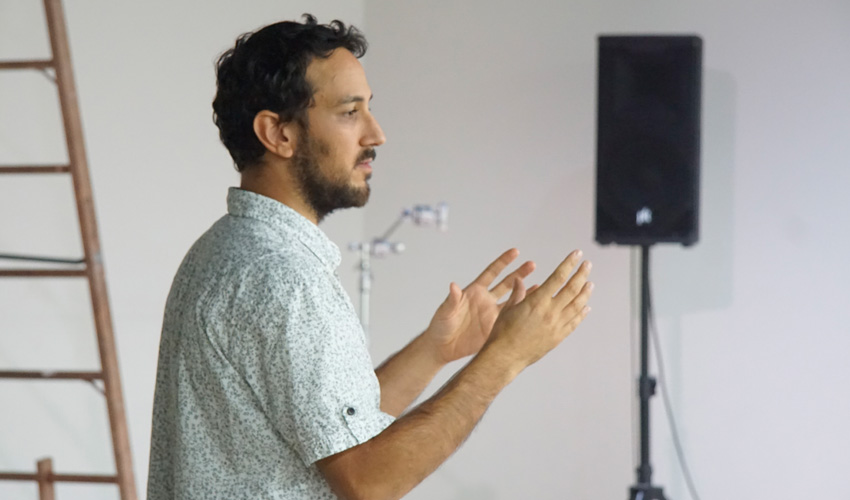 Frequencies invited the public to reconsider and reinvent the function of bells in collective space. Throughout the month, Roundhouse visitors found a sound installation in the Great Hall where George constructed a modern day bell tower. The artist invited the public to compose on this musical structure during open, facilitated sessions. Participants returned to hear their creations played at intervals, and passersby experienced the sounds of this project filling the Roundhouse soundscape.

With a month-long run of this residency, the effect of George’s instrument became familiar to Roundhouse staff and centre users. The delicate sound of the instrument reached those who may not have been seeking it, and melodies were collectively and simultaneously experienced from various places in the building. While the sound was subtle enough to be non-intrusive, it gently altered the atmosphere of the space with distinct musical creations. These creations connected all who could hear them in a moment of deepened listening. However, they were also connected to each other as contributions to one larger, collective piece.

Participant’s contributions were created on a keyboard, sending electrical impulses to 15 electromagnetic mallets that made up the bell tower. Rahi assembled the installation using reclaimed metal, wood, and electronics. He describes the ingredients of his structure as parts that don’t normally go together, however the effect of the combined pieces is harmonious. Like the instrument’s construction, the musical project’s collection of varied pieces combined to form a new and innovative whole. As public contributions amassed, participants’ divergent ideas, melodies, and identities, that might not otherwise coexist, made up a larger and harmonious soundscape for all to hear.

Though Rahi’s structure has been installed in Italy as well as in Vancouver’s Hadden Park, this is the first time that it has been available for the public to “play”. When speaking to George about his work, this seems like a natural extension of some of his artistic concepts: considerations around public space, the involvement of the individual in the collective soundscape, and a reframing of familiar spaces. The bell structure has previously been used as an instrument for professional composition, however, public manipulation of the installation’s potential feels significant.

Here, there is no hierarchy of skill, knowledge or aesthetic; all are welcome to control an instrument that softly rings out across communal space. Often associated with traditions of European or religious power systems, the bell tower is reconfigured by Rahi as a platform for self-expression, discussion, and democratization. Instead of directing the music, as historical composers might have done, Rahi acts as the public’s personal technician, and facilitates dialogue around sound-related experience. More than a single artist’s presentation, George’s presence becomes an invitation. We are welcomed to reconnect to our public environment, exercise our ability to interact autonomously with our soundscape, and to consider the meanings of the sounds that surround us. Through a shared creation of sound, George reminds us that we are all players in a collective space, affecting the whole.

About George: George Rahi is a Vancouver-based composer and sound artist who creates provoking encounters with sound, space, and technology. Using self-created instruments and installation-based methods, his work explores the sculptural aspects of sound and its relationships to various modes of listening. His work has been featured at SPEKTRUM (Berlin), Regenerative Feedback (Rotterdam), Fusebox Festival (Austin), Artificial Sonification (Matera), and the Elektronmusik Studion (Stockholm). He has facilitated instrument design workshops through the Hadden Park Fieldhouse, Western Front, and VIVO Media Arts Centre. He was a recipient of the 2018 R. Murray Schafer Soundscape award and holds an MFA degree from Simon Fraser’s School for the Contemporary Arts.

By Heather Myers. Heather Myers is a mother and dance artist interested in facilitating the space between creative process, audiences, and communities. Throughout the fall of 2019 her arts management studies at Capilano University afforded her the privilege of learning from the art programming heroes of the Vancouver Park Board.